The latest fishing gear from Hampidjan

‘HB Grandi’s magnificent new pelagic vessel, Víkingur, which docked in Iceland before Christmas, has everything that Hampidjan can offer on board,’ said Hampidjan’s sales and marketing director Haraldur Árnason.

The fishing gear package delivered to Víkingur includes a Gloria 2048 Ellipse trawl suitable for blue whiting and herring, he said. Víkingur is also equipped with the new Gloria 1760m surface trawl that he said has performed well on mackerel last year. The latest trawl on board is the 1408 Gloria trawl rigged for fishing capelin off the north-east of Iceland. The ship also has three 90 metre codends rigged for pumping. Two of these are made in conventional diamond mesh while the third is made in T90 netting.

‘The doors they are using a Flipper T20 pelagic doors from Thyborønin Denmark. These are 15 square metre doors, each weighing 4000kg’

DynIce gear on board

Víkingur has new DynIce Warps on board, as well as DynIce Data cable. The 36mm diameter DynIce warps are in a 2425 metre length on each drum and these have a 99 tonne breaking strength. The DynIce Data cable has a 12.40mm diameter and measures 2880 metres. All of the sweeplines, backstrops and gilsons are also made from DynIce rope.

’Hampidjan would like to congratulate HB Grandi and Víkingur’s crew on the arrival of this magnificent new vessel, and we wish them every success in the future,’ he said 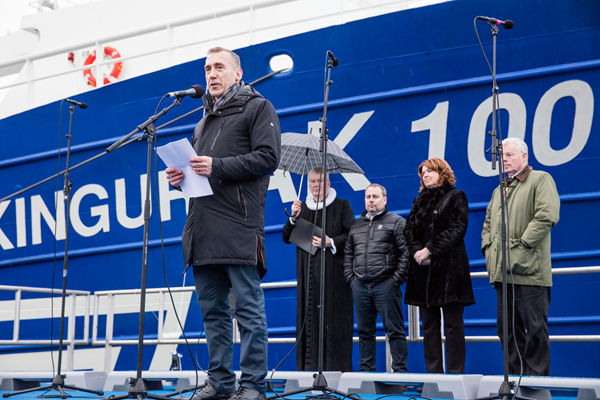