Venus NS-150 – The most advanced fishing gear from Hampidjan 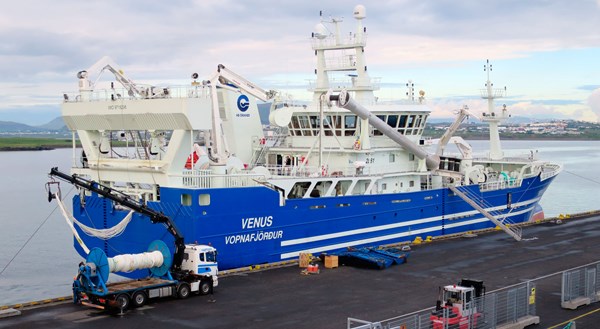 ’HB Grandi’s new multi-role pelagic vessel, Venus, has been fitted out with the most advanced fishing gear technology we have to offer at Hampidjan,’ said Haraldur Árnason, the company’s sales and marketing director.

’The fishing gear supplied to Venus include a Gloria 2048m Ellipse trawl that is highly suitable for blue whiting and herring. The ship also has the new 1760m Gloria 4wide surface trawl for mackerel and herring, which is a design that performed outstandingly well in last year’s fishery, and the picture shows this trawl being delivered to the new ship in the first week of July.’ The name 4wide for the 1760m Gloria refers to the width of the trawl at the wingends compared to the height as the width is four times the height.

There’s also a Gloria 2432m trawl on board that was transferred across from Ingunn and this net is excellent for pair trawling. It’s a design that works well for a pair team on herring or blue whiting, or as a single boat trawl on blue whiting as it has a fantastic opening, both vertically and horizontally. It’s also important to mention that Venus has a new type of trawl doors, a 15 square metre, 4000kg pair of the the latest Flipper T20 doors from Thyborøn in Denmark.

’The Gloria 2432m trawl that was brought across from Ingunn has been in use for seven years, which speaks volumes about the quality of the Helix self-spreading rope that has been through several development phases and is now in its fourth generation. There are several imitation products on the market, but these don’t have the integral self-spreading technology as this is a patented Hampidjan product, so the imitations we see are closer to the old PE/PA rope that Hampidjan first made available around twenty years ago,’ he said.

The ship has been supplied with both standard and T90 codends. In addition, sets of new DynIce warps and DynIce Data cable are part of the package. The warps are 2425 metre lengths of 36mm diameter rope with a 99 tonne breaking strength, while the 12.40mm DynIce Data cable measures 2880 metres. All of the sweeplines and backstrops are also made from DynIce rope.
’At Hampidjan we’d like to offer HB Grandi and the crew of the new Venus our congratulations on their magnificent new ship, and hope they have a safe and successful future,’ Haraldur Árnason concluded.