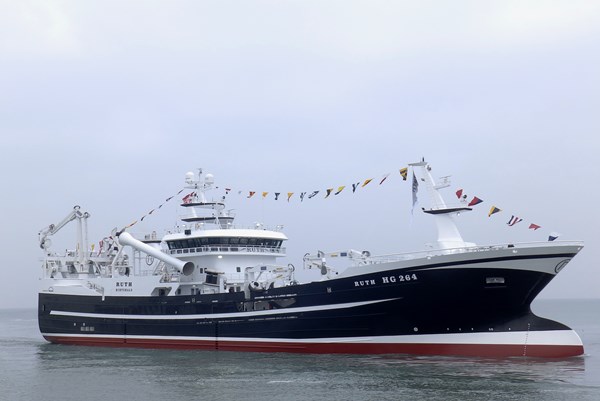 New pelagic vessel Ruth HG-264 was delivered recently to owners Rederiet Ruth in Hirtshals, Denmark. The purser-trawler is 87.80 metres overall with a 16.60 metre beam and was built at the Karstensens Shipyard in Skagen, the first of its kind completed with three winches to tow twin trawl gear. Fishing gear is supplied by Hampidjan’s Danish daughter company Cosmos Trawl, with gear designed to meet the owners’ requirements

According to Cosmos Trawl’s sales and production manager Arne Olesen, the main innovation is that Ruth has three trawl winches and can tow either two trawl side by side or a single trawl rigged with a split codend. This means that the trawl has two codends that can be pumped clear at the same time as the ship is fitted with pumping stations at both quarters. The result is that there is less pressure on the fish than when fishing with a single trawl and codend, so the quality of the catch can be expected to be better.

‘Trawlers fishing with more than one trawl at a time is not new, and multi-rig trawling is widespread. Smaller trawlers have been able to fish with two small pelagic trawls, but this is the first time that this technology has been tried on a larger vessel, and certainly on a trawler of Ruth’s size,’ Arne Olesen said.

For herring and mackerel:

For fishing sandeel and sprat:

A variety of DynIce equipment

Cosmos Trawl’s managing director Haraldur Árnason said that this venture to tow two trawls side by side is an exciting one.

‘Tests in the Hirtshals flume tank have been run to develop the necessary technology with close co-operation between Cosmos Trawl’s gear designers and Ruth’s owner and skippers who have had this idea in mind for a long time. The models performed well in the tank, although that’s not the same as full scale gear under real conditions, but the tank tests look promising. We expect them to start trying this method shortly and we will be watching closely, alongside the skippers and owner,’ he said.