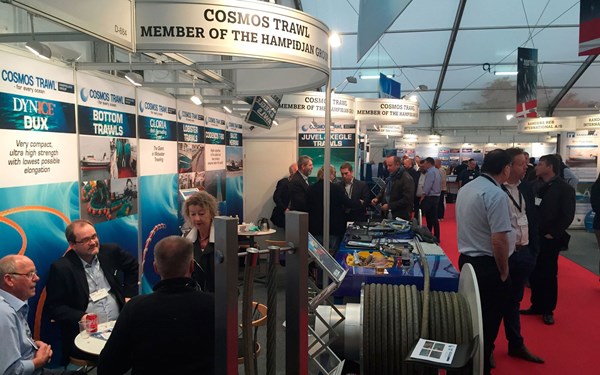 Successful Danfish exhibition in Aalborg
‘We’re very satisfied with the exhibition, and as far as I’m concerned, this has been the best one yet. An estimated 14,000 people attended this year and a quarter of those came from other countries. There was plenty of interest in our products , not least the DynIce trawl warps and sounder cable, and also the Gloria Helix trawl and the Cosmos shrimp trawls. We signed contracts for several orders and there was a lot of interest in what we are able to do,’ said Hampidjan’s sales and marketing director Haraldur Árnason, who also doubles as Cosmos Trawl’s managing director. 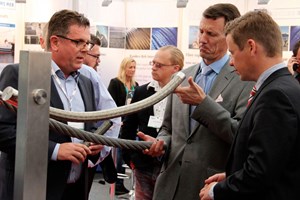 The exhibition was Danfish International, held at Aalborg in Denmark last week. Hampidjan’s Danish group companies, Cosmos Trawl and Nordsø Trawl, were there with a joint stand to display their own services as well as Hampidjan’s products.‘On the last day of the exhibition we had a trip to the flume tank in Hirtshals with a group of Icelandic and Russian vessel operators where we showed them the Gloria Wide Body pelagic trawl, designed for targeting Alaska pollock and the Gloria 4-Wide trawl, designed for mackerel. We also demonstrated a new design of the Gloria Helix blue whiting trawl that will be taken into use in the next few weeks.’ 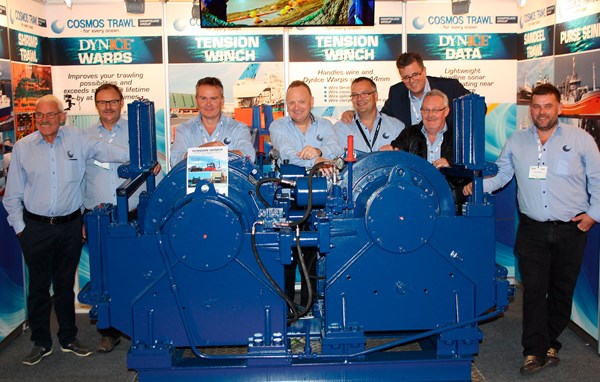 One of the things that attracted a great deal of attention was the tension winch that Cosmos Trawl has been using all this year in Hirtshals. This has added to the range of services available in Denmark. This kind of equipment is rare and having this in Hirtshals is a real advantage for the North Sea fleet. We have seen a series of requests for its services from our clients in Northern Europe in the last few months.’
‘This winch weighs two tonnes, and we decided to take it with us to the exhibition. This piece of equipment has a special role in that it is used to spool DynIce or steel wire warps evenly onto a trawler’s drums under a steady tension. This makes a big difference, both making things easier for the crew and also to prolong the working life of the warps. This is something it’s important to get right, and this initiative on our part attracted a great deal of attention,’ Haraldur Árnason said.