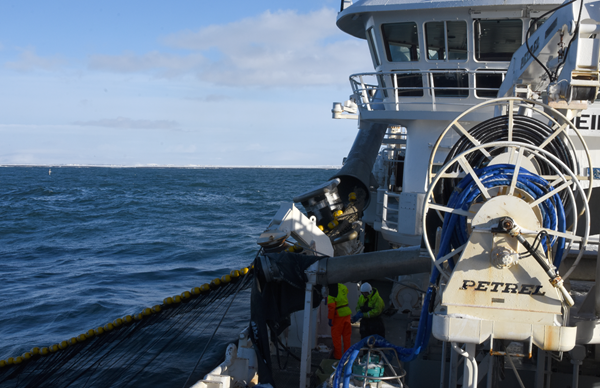 Pelagic vessel Heimaey is now on its way to fishing grounds off Reykjanes  after discharging 2000 tonnes of capelin at Thórshöfn yesterday and today. According to skipper Ólafur Einarsson, the fish were caught around 20 nautical miles west of the Westmann Islands.

Heimaey made headlines recently after taking a giant shot of capelin just off the Sandur fishing grounds between the Westmann Islands and the mainland.

‘This was easily the biggest shot I have ever had, between 2300 and 2400 tonnes. We would never have been able to pump this on board if the purse seine hadn’t been simply sitting on the bottom in about 16 metres. It’s a sand bottom there so there was no danger of doing any damage,’ he said, adding that Álsey also managed to pump around 700 tonnes of capelin from the same shot.
Ólafur Einarsson said that it is clear that there are huge volumes of capelin migrating westwards along the south coast in extremely dense shoals.

‘We had a 1500 tonne shot a few days before and we didn’t think we’d be able to do better than that. But the giant shot proved us wrong. Say what you like, but we can’t be anything other than optimistic about the growth and distribution of the capelin stock. It wouldn’t surprise me to see a healthy westerly migration of capelin quite soon and then there would be good reason to re-examine the quotas.’
Although these are shallow purse seines that are used for catching capelin off the south coast, these fishing gears are far from small.

‘The shallow purse seine we use is showing its age, and we are regularly replacing sections with new in addition to the usual repairs and maintenance. Now we have Hampiðjan’s DynIce lines both top and bottom, and these have shown that they are both stronger and lighter than the ropes we used there in the past. They were made to work hard when we had that giant shot, and they performed perfectly,’ he said, making no secret of the fatc that the purse seine is his preferred fishing method, and purse seining is a far more enjoyable way of fishing than using a pelagic trawl. 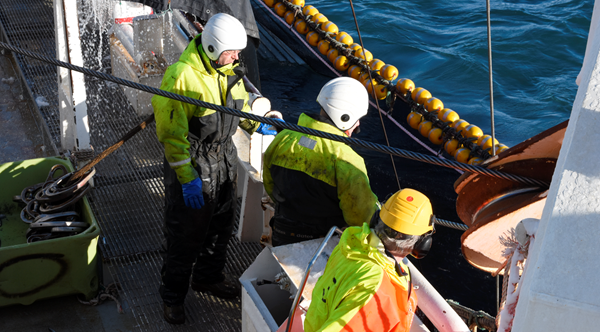 ‘Our purse seine is around 100 metres deep and 420 metres long. Some boats have shallow purse seines as long as 550 metres, but this one suits us. It has lead weights on the lower edge. I don’t remember the overall weight, but it’s no lightweight as we use between 505 and 7.50kg per metre of leadline. The twine sizes in the gear vary. We use no 36 as the smallest gauge twine and all the way up to no 72 in the bag. The deep purse seines are much bigger, up to 200 metres deep and 650 metres long. We don’t use our deep purse seine all that much, and it’s used most when we are fishing for capelin off the north coast and the Eastfjords in January and into February,’ Ólafur Einarsson said.