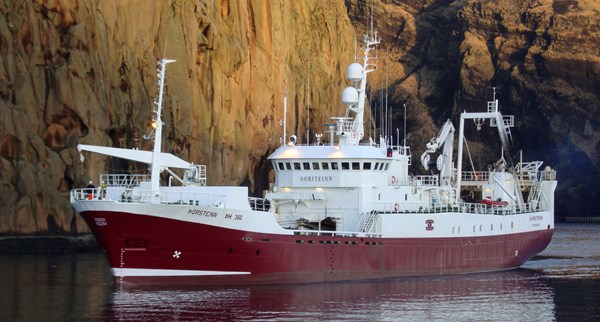 ‘When I saw the news item about the thousandth Gloria trawl being delivered, I immediately thought that the success of this gear is no coincidence,’ said Hördur Gudmundsson, skipper of pelagic vessel Thorsteinn TH-360.
‘That same day we were taking apart an old 1152 metre Gloria Helix trawl that we have been using for ten years, and I couldn’t help remembering that its frame lines were 16mm braided DynIce rope that we had previously used in our very first Gloria self-spreading trawl on blue whiting back in 1999.’
He told us that he contacted Gudmundur Gunnarsson at Hampidjan and explained that as far as he could see, there was nothing wrong with the 14-year old DynIce ropes that appeared to be in fine shape after being used in blue whiting, herring, capelin and mackerel seasons.

‘We sent Hampidjan a section of rope to check and they’ll do a tension test on it to find out if it’s all right to use it for gilsons and other uses in future. If that’s the case, then this rope certainly lasts unbelievably well,’ he said.
Hampidjan’s development manager Gudmundur Gunnarsson said that he remembers well the first Gloria self-spreading trawl being delivered to Thorsteinn, which at that time was owned by Samherji and had an EA-810 registration.
‘That was a 1664 metre Gloria self-spreading trawl that we tried first on blue whiting off the east coast. It worked so well that the crew started calling it the ’moneyspinner.’ When that trawl was worn out in 2003 the frame lines were stripped off and used on an 1152 metre Gloria Helix trawl, the same one that was taken apart in the Westmann Islands last month,’ he said.


Thyborøn doors never let us down

Hördur Gudmundsson has been Thorsteinn’s skipper since 1995, and he says that the DynIce ropes aren’t the only thing that have lasted during the fishing career of the ship that was built back in 1988.
‘I’d like to mention the pair of 13m2 Thyborøn pelagic doors that we took on board in 2002. It didn’t make any difference if we were fishing on blue whiting, capelin, herring or mackerel. The same settings worked for everything and we even did a couple of good trips on deep sea redfish with those doors. We never needed to change anything and we used these doors right up until they were replaced earlier this year,’ he said, but added that he feels that the ship itself deserves the real credit.
‘It’s a magnificent vessel and I’m not the  only one who reckons that this is the best sea boat they have sailed in. It hardly budges in bad weather and it has been very well looked after. But now it’s due to be replaced shortly with the new vessel that Ísfélag Vestmannaeyja is building in Turkey and which is due to arrive in Iceland in March next year,’ said Hördur Gudmundsson, who is due to sail as the new ship’s skipper.