The latest recruit to the Hampiðjan team is Hróðmar Ingi Sigurðsson. His role will be to concentrate on sales of trawl doors and warps, as well as general fishing gear and related items.

Hróðmar Ingi has qualifications in business and management from the Technical University of Iceland and holds Class 2 and Class 3 deck officer certification from the College of Navigation in Reykjavík. He has worked at sea and ashore, most recently as chief mate on board factory trawler Júlíus Geirmundsson. Prior to that he had been the purchasing and operations manager at Öryggismiðstöðin and Rými-Ofnasmiðjan, and skipper of whale watching vessel Elding.

‘I first went to sea when I was 17. I grew up in Keflavík and the obvious way ahead was to give fishing a try. As a youngster I had worked a lot in fish plants and fisheries had been an obsession for as long as I remember. I started on longliners from Sandgerði, and my first trips on a trawler were on Bergvík, which turned out to be the last two trips before it was sold. Kristinn Gestsson was the skipper. Then I went to freezer trawler Aðalvík and was there until it was sold to ÚA. The trawler was renamed Sólbakur. I was part of the package and stayed on Sólbakur for about a year,’ Hroðmar Ingi said.

He said that he first experienced the capelin fishery on purse seiner Sjávarborg for the 1992 season, and once that year’s fishery was over, he found a berth on freezer trawler Höfrungur III that same year. 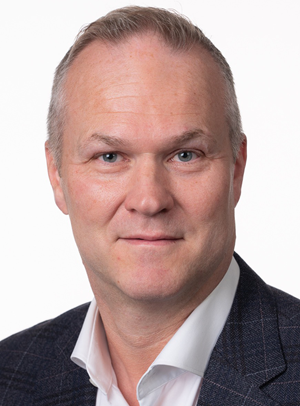 ‘My education as a trawler seaman was there on board Höfrungur III. I kept coming back for long time. Then came navigation college, and after that was university,’ he said.

‘I had been ashore for a couple of years when Covid hit, and that’s when I joined Júlíus Geirmundsson and was there for two years, until coming to Hampiðjan.’
He said that his first encounter with Hampiðjan gear was on board Höfrungur III.

‘We mostly had a Bacalao trawls with 88 and 106 metre stretched mesh fishing circles, and both delivered fantastic results,’ Hróðmar Ingi Sigurðsson said.