Happy with the Hemmer 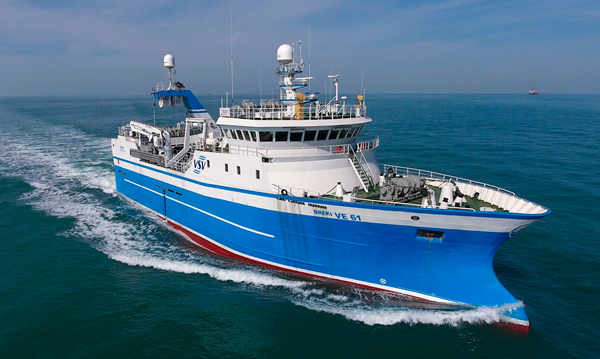 ‘I’m very satisfied with the results after switching to the Hemmer demersal trawl. My experience with the Seastar trawl had been very good, and we started with one Seastar and one Hemmer trawl on board when the new trawler was delivered. We quickly saw that the Hemmer trawl needed much less maintenance. We also saw that the flow of water through the gear was better, there are virtually no stickers and it is lighter to tow, as well as fishing just as well as the Seastar trawl. So now we are using two Hemmer trawls - and saving fuel,’ said Magnús Ríkharðsson, skipper of Breki, one of Iceland’s newest stern trawlers  which arrived on 20th of July this year. 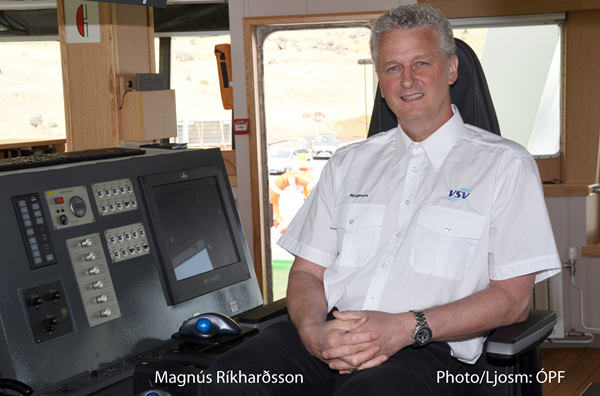 Breki is fitted with three Ibercisa trawl winches and a trawl control system from Naust Marine, and is designed to work twin-rig gear. The Hemmer trawls used by Magnús Ríkharðsson and his crew are supplied by Fjarðarnet in Akureyri and are designed by master netmaker Hermann Guðmundsson.

Magnús Ríkharðsson was skipper of Drangavík for twenty-five years, and said that there is plenty to get used to with the new trawler.
‘Everything is on a larger scale than I’m used to. I had never been twin-rigging for groundfish, although I had the experience behind me of twin-rig trawling for langoustine on Drangavík, even though we only had two winches. We used a sweepline winch for the middle wire and that setup served us pretty well,’ he said, adding that he liked the look of the Hemmer trawl right away and felt it was worth trying it out alongside the Seastar trawl. The result was a decision to switch to using only Hemmer trawls.

There’s one thing that hasn’t changed with the move to a new ship. Magnús uses 7.26 square metre Type 12 Thyborøn doors weighing 3500kg. He’s very satisfied with these doors and sees no reason to switch to pelagic doors as so many of the groundfish trawlers have done.
‘When we’re fishing with two trawls we use a 5-tonne clump on the middle wire. The rule of thumb is that the clump is around 70% of the combined weight of the doors. The door spread can be 220 to 230 metres. I use 90 metre sweeplines, with split bridles for the first 50 metres in front of the trawl, which gives us a headline height of five to six metres. 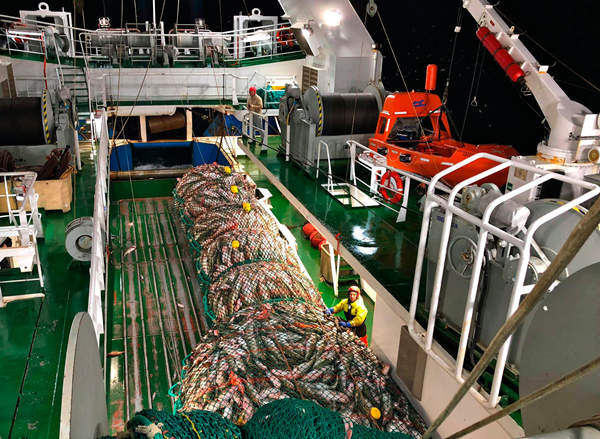 Why tow two trawls – does this produce better catch rates for some species?
‘Experience shows that redfish is where there’s a real increase in catch, around 50% more compared to fishing with a single trawl. When we’re fishing for cod, haddock and saithe we see 30-40% more fish with two trawls. That makes a difference for us. We’re fishing five-day trips, often starting on redfish on southern areas and then heading for the Westfjords for cod. Out of these five days at sea, we manage around three days fishing. Normally we have 140 to 150 tonnes in a trip, and that’s pretty good if you take into account the actual time spent fishing,’ Magnús said, adding that the sea state dictates whether they tow one or two trawls.

‘It’s always something you have to assess at the time, but the crew’s safety is always the priority. It speaks for itself that there’s more change of getting the gear wrapped around itself if you’re towing two trawls, and in heavy seas the chance of that happening is going to be greater, so it’s best to err on the side of caution,’ Magnús Ríkharðsson said.