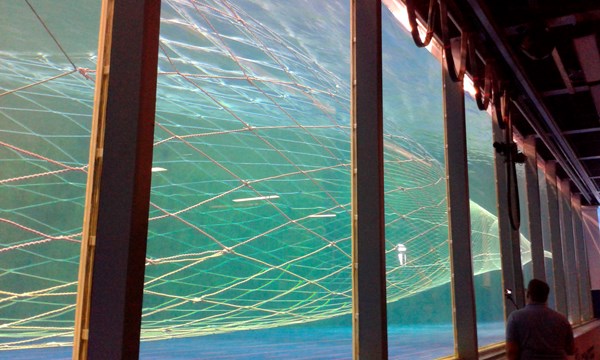 Hampidjan’s annual December flume tank trip is over and was exceptionally successful with a great many innovations demonstrated in an event that strengthens ties with customers. 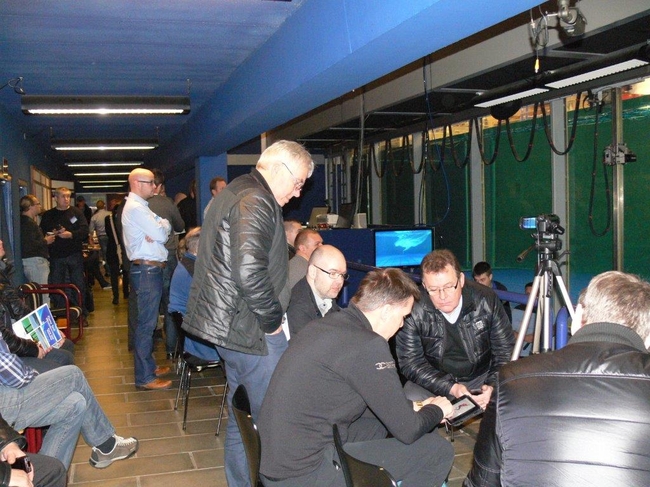 Mackerel trawl better and wider
Hampidjan was at the flume tank in Hirtshals from the 3rd to the 5th of December with a group of 85 people from 14 countries in attendance.
‘These were some of the main operators and skippers from around the world,’ said fishing gear sales and marketing manager Haraldur Árnason. ‘We held both demonstrations and lectures around all of our products, including DynIce Warps, Gloria trawls, codends and more. Staff from Furuno Norge were also there with us and they showed their new headline sounder, which attracted plenty of interest. We also demonstrated Thyborøn trawl doors. We showed all of the Gloria variations and also went through the whole family of demersal gear, showing all of the latest new features.’
The trawl models are scaled down, with each trawl demonstrated with variations. He said that the new mackerel trawl, the Gloria Helix 1760 4-Wide was also shown in the tank.
‘Four of our customers used this trawl this year with great success and this attracted a lot of attention. This design’s chief advantage is that its spread is four times its vertical opening, with a 50 metre opening and 200 metres between the wing ends,’ he said.
This wide spread means that the trawl catches more clean mackerel, significantly reducing by-catch. The 4-Wide trawl’s predecessor, the Gloria 1600, had relative dimensions of 1:3, and Haraldur Árnason said that it is noticeable that in spite of the increased spread, towing resistance has not increased and has stayed much the same.
‘What is so special about this is that the skills of Hampidjan’s designers worked closely with skippers who take part in this fishery, using their ideas to produce a better and more efficient set of gear, which has been shown to be a highly successful combination.’

Winning combination, pelagic doors and DynIce Warps
Haraldur Árnason said that  a highly effective combination is to use DynIce Warps with pelagic doors for bottom trawling, and this revolutionary approach is becoming increasingly widespread with more than a hundred users today. This combination was examined specially during the flume tank session, particularly with the possibility of eliminating wing-end weights, and this looks very promising, reducing deck hazards and also making this approach increasingly seabed-friendly.

It’s all about Helix
Helix self-spreading technology was demonstrated in the flume tank with Gloria pelagic trawls.
‘We also showed conventional Nylex ropes in trawls, showing in real terms the difference compared to self-spreading gear, which was interesting to see.’
‘With the Helix ropes, the circumference of the gear increases immediately by around 70%, which is a massive difference that is due to the Helix ropes providing spread in all directions,’ he said, commenting that this does not increase drag.
‘Around 90% of our Gloria trawls are now made with Helix self-spreading ropes today.’
These ropes have been in production and constant development at Hampidjan over the last fourteen years and the fourth variation of helix ropes is currently in use.

Better quality with T90 codends
Hampidjan demonstrated its range of codends, with T90 models taking centre stage.
‘T90 means that the netting is turned through 90° from the conventional orientation, so it is hung on side knots instead of pickups,’ Haraldur Árnason said, explaining that this opens meshes more effectively, with a 38% opening compared to the usual 18%, which improves the flow through the meshes, equivalent to 90% of a vessel’s towing power at a 4-knot towing speed. He said that with conventional netting the drag is greater and flow is around 60% of the towing speed.
‘This means that a conventional codend is heavier while a T90 codend lighter and the fish quality is better as the meshes are open, so the fish are handled better.’
He said that although these principles have been known for many years, the company’s designers have been working with this for the last ten years to develop codends, and that these have now been perfected to the point that their efficiency has been maximised. These codends have proved to be very popular and Haraldur Árnason said that virtually every codend Hampidjan now supplies is made in T90. 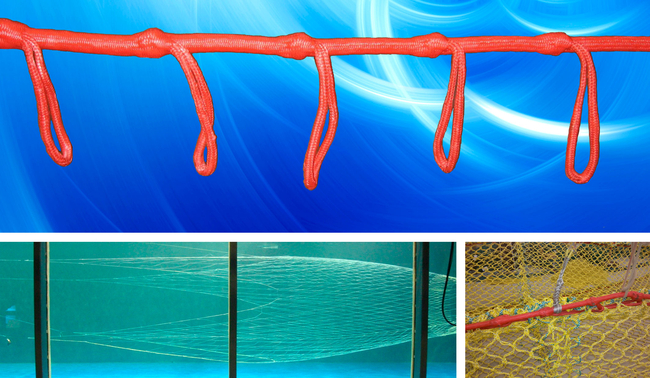 Also on display at the flume tank in Hirtshals were DynIce Quicklines, developed as belly and rigging lines for codends.
‘The innovation here lies in the development of a new variety of braided rope with integral loops at precise intervals. These ropes can be used to make a frame, for instance for codends, replacing the usual seized selvedges and frame ropes. The loops are threaded through the meshes of the net sections, closing and fixing the the netting with set hanging ratios with each loop. This approach makes rigging fishing gears considerably simpler, and rigging gear like this is much faster than the conventional method. It’s also worth mentioning that the rigging can be adjusted quickly and easily as the Quickline is designed with this in mind.’

Strengthening links
Haraldur Árnason said that the annual flume tank trip is a key event Hampidjan, as it demonstrates what fishing gears look like in the water.
‘We offer our customers the option of running trials to show how their gear arrangements look with their own settings, something that the skippers appreciate.’
He commented that the social side of the annual tank trip is also important.
‘Often skippers finally get to meet in person, which also strengthens the links,’ he said.
These regular flume tank trips go back 25 years and he added that they are a key part of the run-up to Christmas.
‘After the visit to Hirtshals, the weekend often ends up with a stopover in Copenhagen where our wives have been making the most of the shopping opportunities.’