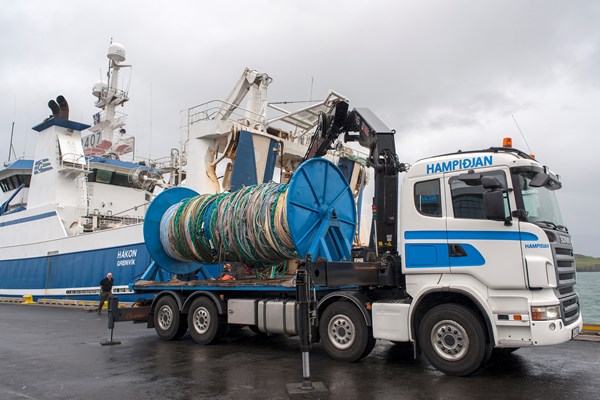 A deal was struck earlier this year between fishing company Gjögur hf, which operates pelagic vessel Hákon EA-148, and Hampidjan for a new 1600m Gloria pelagic trawl for fishing mackerel. This is hardly news in itself, except that this was the thousandth Gloria trawl to be made by the company. Hampidjan would like to congratulate the owners and crew of Hákon on their new trawl.

Hákon has been fishing on mackerel this summer, and when we spoke to one of Hákon’s skippers, Björgvin Birgisson (his oppositee number is Gudjón Jónsson), Hákon was sheltering in a lee at Rif while the factory down below was in full production.

‘We have been fishing in the Kolla Gully west of Snæfellsnes, but the weather blew up last night and so we decided to seek shelter. Yesterday was pretty good, with 300 tonnes of mackerel in two hauls and that takes time to go through the factory. Our mackerel is H&G processed and frozen, and we can manage between 80 and 90 tonnes in 24 hours,’ he said, adding that the new Gloria trawl has performed well.

‘This is the first specially designed pelagic trawl that we have used, and we already had a larger trawl on board that never worked all that well on mackerel. We have been using the new trawl since the season started in July. It didn’t start well as we began by ripping the belly, but since then there have been no problems and it has fished like a dream,’ Björgvin Birgisson said.

It’s going to be Gloria!

The origins of the Gloria trawl go back to the start of the factory trawler fleet’s fishing on deep sea redfish in 1989, deep south west of Iceland. A good deal has changed since then after years of constant development of the Gloria trawl design, which is the basis of Hampidjan’s success in this field. According to the company’s development manager Gudmundur Gunnarsson, this development would never have been possible without close co-operation with fishing companies, skippers and crews over the 24 years since the prototype Gloria trawl first appeared.

‘The name comes from when we were trying out a new design of trawl on board Haraldur Kristjánsson HF on the Reykjanes Ridge. After eleven days of unsuccessful trials to get the gear to function, it finally worked on the first of May 1989,’ he recalled. ‘That was the start of something that is still in progress today, although fishing isn’t as strong as it was back when 1996 was the best year ever.’

‘When we were steaming home, skipper Páll Eyjólfsson and I were fixing the gear on the deck and we agreed that the trip had been a tough one with all the problems we had encountered, but it has been a success. There’s a tradition that a successful gear design gets a name of its own and we had been wondering what name to give this one. There had been a few suggestions, but Páll took the decision for us. “You lot at Hampidjan have committed a few glorias with this trawl of yours,” he said.’

Gudmundur Gunnarsson explained that in Icelandic, Gloria is both a name, and also an expression for a epic blunder – or a glorious mistake.

‘So I latched on to what he had said straight away and added: “that’s the name. It’s going to be a Gloria.”’

Today Gloria trawls are used for fishing most pelagic species, ranging from on the surface to close to the sea bed with wide body gear designed for spread rather than vertical opening, and these trawls have not just been a success for Hampidjan in Iceland as fishing vessels in 24 countries now use Gloria gear. Around 60% of the Gloria trawls made now go for export to customers overseas.
One of Hampidjan’s main aims remains to stay at the top of sales and service with outstanding fishing gear wherever there is a demand for the best tools for the job. The company intends to continue to be daring in its innovation as it develops the pelagic trawls of the future.