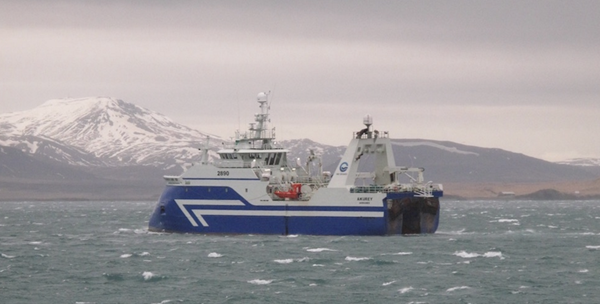 Akurey’s skipper Eiríkur Jónsson has worked extensively with Hampiðjan’s fishing gear designers to come up with more efficient fishing gear, and Akurey has seen a number of new rigs on the deck.

The trawl made in T90 configuration netting throughout had already been in use on board Akurey for quite some time, when some ideas came about for a new look at the codends to improve selectivity rates.

‘I was talking things over with Guðmundur Guðmundsson at Hampiðjan and he asked if I’d be interested in trying out a codend rigged on Quicklines,' he said. 'I understand that these Quicklines made with loops had originally been intended for something completely different, but Guðmundur is the kind of person who sees something new and always wonders how he can make use if it. This had been tried out with a pelagic codend, and there was a set of 20 metre lines going spare. So we had them.’

This approach involves doing away with the traditional selvedges, instead rigging the netting to loops set at specific intervals into the DynIce ropes that form the belly lines. The tension is on the lines, not the netting, allowing the meshes to open fully.
‘We had to think through the hanging ratios and now we have the codend rigged with the lines 7% shorter than the netting. That has worked well, but we can play with this to get it right. In fact, we’ve tried a lot of different rigging arrangements, so that much of the time it feels like we’ve been taking two steps forward and one step back,’ he said. 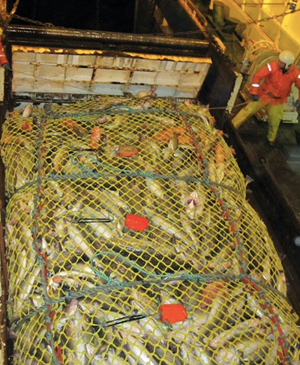 The original T90 codend in 155mm: all good-sized fish
The success of the T90 codend rigged on Quicklines has been significant. The meshes are fully open during the tow and even the codend straps have been dispensed with. Virtually all undersized fish are able to escape from the trawl, and practically every fish that arrives on deck makes its way to the fishroom.

The netting is machine made with a couple of rows in high-strength Dyneema, and these are used to loop the Quicklines through. So each codend is made with a single sewn seam, and without any of the traditional laced selvedges.
‘It’s easy to rig, none of the lacing that we had to do before. We order the netting to size, it’s sewn together and the loops go through the strong meshes. Job done. This is a revolutionary codend. There’s a cost to this, but there’s hardly any work involved.’
‘Now we’re using four-panel codends that Hermann Guðmundsson at Hampiðjan Ísland in Akureyri made for us in 135mm mesh, and these work even better,’ he said. Moving on from the original Quickline codends, Akurey is now working with split codends, which means there is less pressure on the fish and production ashore had been satisfied with the quality of Akurey’s landings.
‘Less pressure means better fish. We see much less small fish, although in a mixed fishery you can expect to lose some of what you’d prefer to keep, but not in any volume.’ Akurey works with a 135mm mesh codend for redfish and saithe, switching to 155mm for cod.
‘That works well on cod, and it means we lose pretty much everything we wouldn’t want to keep. It’s also good for fishing on mixed cod and redfish, which isn’t a good mix as production doesn’t like cod with redfish spines. But this codend lets us lose all but the largest redfish.’

Choosing the best mesh size for the job
Eiríkur Jónsson added that there have been trials with a 110mm codend on redfish, as the opinion is that the 135mm minimum mesh size tends to release to much good-sized redfish – and extensive research has been done on this.
‘You can see then floating away from the codend when we haul, and this is fish that’s already dead, which we have spent time and fuel to catch,’ he said.

‘I can’t imagine anyone would choose to fish with small mesh to focus on small fish. Production doesn’t want small fish, and neither do sales. So the viewpoint is changing and there are good reasons for us to be able to choose the best mesh size for the job, going for the optimal mesh size for retention and effective selection of the species we’re fishing for.’ 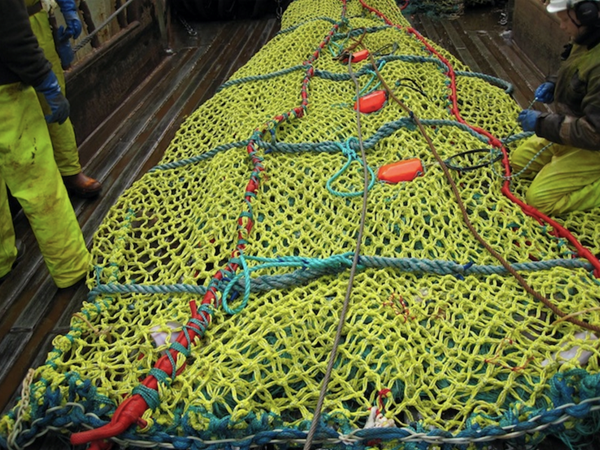 He commented that using codend sounders to watch the fish in the codends has made the traditional codend sensors less critical.
‘We see what’s collecting under the sounders and often don’t wait for the codend sensors to be triggered. We use a codend sounder on each bag, and often we use a belly sounder as well to see a cross section of fish as it makes its way down the trawl.’

As reported in April 2019 Hook and Net web magazine.