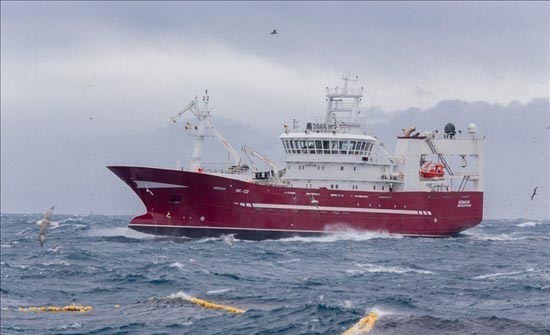 The crew of pelagic vessel Börkur had an eye-opening experience while fishing off Glettinganes in eastern Iceland. This was during their last trip before a break for the Icelandic Fisheries Exhibition when they saw 500 tonnes enter their 1600 metre Gloria Helix herring/mackerel trawl in just one hour.
Hjörvar Hjálmarsson, who was skipper for the trip, commented that the rate of entry into the trawl during this short haul was the highest he remembers ever seeing.

“There were some strong marks there, and the herring were loose off the bottom. So we dropped the trawl down to 60 fathoms in a water depth of 90 fathoms. Then we had our hands full watching the codends sensors as the fish were finding their way into the trawl so fast. When the last sensor pinged, we had to haul. We had no idea how much more fish there might be further forward in the trawl while we were hauling, but it all worked out and this was a 500 tonne haul,’ he said, adding that they work with four codend sensors on the gear.

He commented that this was some excellent quality herring and the same quality as would normally be expected from fish caught in a purse seine, which he attributes to the rapid entry and the shortness of the tow.
Börkur has been fishing with a 1600 metre Gloria pelagic trawl for the last two years, and Hjörvar Hjálmarsson said that they are completely satisfied with its performance on both herring and mackerel.

‘We got away without any damage last summer and there were practically no repairs needed. This trawl should last at least one more season,’ he said when we spoke to him after he had switched with skipper Sturla Thórdarson, who had taken Börkur to herring grounds off the south of Iceland.

‘Our quota position on Atlanto-Scandian herring is pretty good, and we have the option of searching for Icelandic summer-spawning herring off the east coast as well even though we might get some Atlanto-Scandian herring with it. There’s also still some mackerel off the east coast, but this is large mackerel that are dispersed. My feeling is that this is mackerel that will stay in Icelandic waters and spawn here as it’s a while now since the main mackerel stock migrated to its preferred spawning grounds in Norwegian waters,’ Hjörvar Hjálmarsson said.