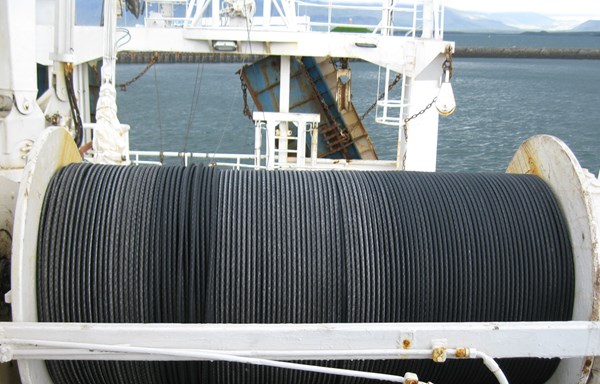 ‘I was one of the first to start using DynIce Data headline sounder cable, first with 1000 metres until we had an accident and parted the cable in the middle. Hampidjan’s staff have now developed splicing technique for DynIce Data cable and we reached a gentlemen’s agreement that Hampidjan would splice an extra 400 metres to the newest version of the 1900 metre length we already have on board.

This had not been done before and we weren’t sure how well it would work, but to make a long story short, we have been working with this since the beginning of July and it works like a dream,’ said Sturla Einarsson, skipper of Greenland-registered trawler Tasilaq which was previously Gudmundur VE-29. Sturla Einarsson is currently fishing on Atlanto-Scandian herring in the Greenland EEZ north of Melrakkaslétta.

‘There are herring marks everywhere but the problem is that the fish are dispersed and don’t seem to have bunched up around feed. At the moment we are still fishing with our small mackerel trawl, but I’m convinced that we could do extremely well here with a big Gloria self-spreading trawl towed by a pair team,‘ he said. All of the fish is processed on board and Tasilaq has a production capacity of 135 tonnes of fillets per 24 hours. This means that it needs to catch 270 tonnes of herring every day to maintain full production.

Lost gear
We can’t leave Sturla Einarsson without an explanation of the incident this summer between Tasilaq and Tuneq, which was previously Thorsteinn TH.

‘What happened was that the footrope parted on my side and we lost the trawl and the headline sounder cable. I’m sure there was some concern on the deck when the cable started running off the drum with all of the noise that goes with it. But it all worked out. We managed to get our end back and managed to retrieve both the gear and the cable,’ he said, commenting that he is n no doubt that there are major advantages to using DynIce Warps and DynIce Data cable in the future.

‘I’m certainly interested in fitting Tasilaq out with DynIce Warps. We are still using steel wire warps and you can see the slack in them as they lead away down to the doors. The DynIce Data cable means that we are constantly connected, and I’m sure we’d see similar results with DynIce Warps replacing steel wire,’ Sturla Einarsson said.