It’s now five years since the first trials in Iceland with the innovative method of using pelagic doors to spread a bottom trawl on board Neskaupstadur trawler Bardi, and experience has shown that the results are positive. The number of skippers using this has increased every year since and now every east coast trawler uses this method. Elsewhere, two of HB Grandi’s trawlers, Sturlaugur H Bödvarsson and Therney, as well as Kaldbakur, Hrafn Sveinbjarnarson and Vestmannaey, have all been using pelagic doors with their groundfish gear for several years with excellent results. 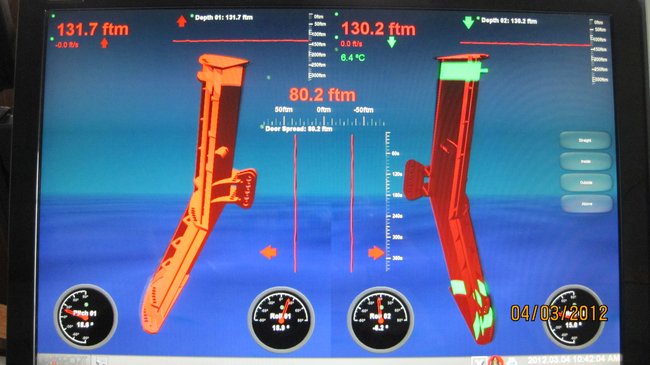 This method of fishing goes back to trials originally carried out in in the Alaska fisheries in the United states. In Iceland it was Thyborøn Trawl Doors and fishing company Síldarvinnslan that took the step to try flying doors on board Bardi in 2009, followed by Björgvin a year later. These first trials to replace conventional bottom doors with pelagic doors looked promising right from the start and did not affect fishing efficiency.

One of those who has extensive experience with this fishing method is Eiríkur Jónsson, skipper of Sturlaugur H Bödvarsson, where this was first tried out in February 2012.
‘We started out with a pair of  six square metre Apollo X-stream pelagic doors from Hampidjan that weighed 1800kg each. It turned out that these were too efficient, even though they were rigged for the smallest possible angle of attack. But in spite of this, the doors functioned extremely well, and I talked over the options of switching to smaller doors with one of Hampidjan’s gear technologists. The result was that we rigged a pair of 5.50 square metre Apollo X-Stream doors in August last year. These doors are thicker than the old ones and have the same weight at 1800kg. These work very well and there undisputed advantages in using these compared to bottom doors. The doors very seldom  the ground and we keep them at least three fathoms off the bottom. Our experience is that we get significantly less gear damage working like this, and there’s a saving in gear costs. The pelagic doors are lighter to tow and the winch has an easier time of it. We have definitely reduced fuel consumption. Repairs and maintenance on the trawl doors and wire costs are much lower, and on top of that we aren’t catching any less than we did before,’ Eiríkur Jónsson said.
He explained that a pair of 1450 to 1500kg weights are hung on each sweepline, and the total weight of these weights and the doors combinedis approximately equal to the weight of their old bottom doors at 3200kg each.
‘I don’t see any difference in catches of particular species and our overall catches are much the same. Some skippers feel that they get more saithe with pelagic doors, but there has been so little saithe around last autumn and through the winter that it’s not easy to tell the difference,’ he said.
He commented that the main disadvantage is that when towing against a strong current, the doors tend to lift, and they have been able to counter this by reducing towing speed and increasing the warp length. 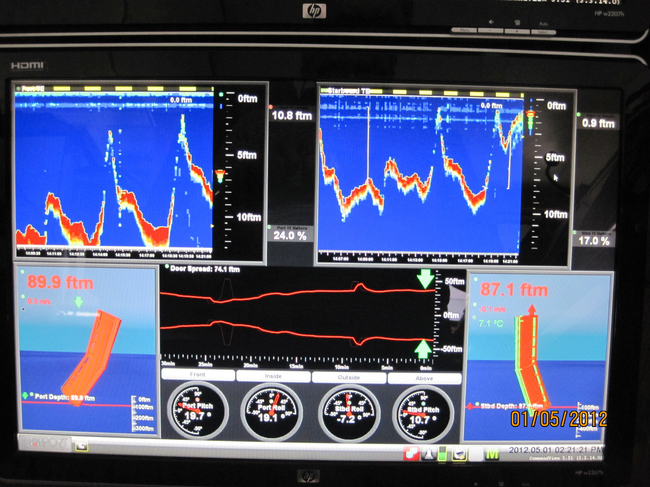 ‘I reckon we have solved this problem by shackling the warp into the lowest bracket setting on the doors. This keeps the doors upright in the water and stops them from seeking upwards. After making this change, we also needed to shoot less wire and we use around double the depth of water. We have also tried the doors in a strong tide and they haven’t lifted even at full power. These days it’s a lot easier to control the doors thanks to the huge choice of sensors that we now have. We have a double set of sensors on each trawl door, one set to show the doors’ depth and the other for door spread. We can also see the pitch and roll of the doors and we can see the distance from each door over the ground. All this electronic equipment from Marport and Scanmar makes it possible to control the doors with a great deal of precision.’ Eiríkur Jónsson commented.